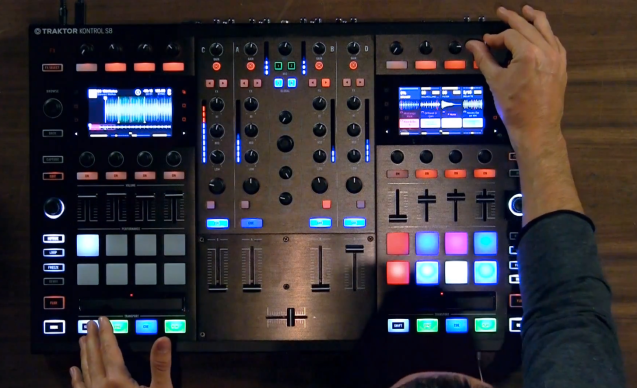 After an exclusive showcase event at Fabric, the new Traktor S8 slowly slips out into the spotlight from the corridors of Native Instruments.  Here, we have DJ Tech Tools founder Ian Golden taking the S8 out for a spin, but there are, of course, no jog wheels here. Just a bunch of moving lights and visuals.

It weighs more.  It’s a little larger in size when compared to the original S4, but still smaller than Pioneer’s DDJ-SX  and Numark’s NS7 behemoths.  It makes controlling effects a breeze.  It has four analog inputs, and has much more real estate between the faders with the added option of removing the fader panel plate for future mods.  The biggest turn off is the price tag: $1199.  I am sorry, but it should have not gone above a thousand bucks.  I still think, though, it is a masterpiece of engineering and will make a star out of many, but I still have tons of fun gigging on my original S4, even though I don’t really mind relinquishing the jog wheels.

The screens rock!  You can somehow flip your laptop down and cast it aside.  Kind of like a baby bird’s first plight from the nest.  And though your laptop will be cast aside, you will still need its CPU power to be heard at the souncheck, so it is a bit ambiguous.  The laptop never really bothered me, and if you happen to have one of the new Macbooks, you have less weight to carry and less headaches with overheating issues and HDD failures.  But getting back to the screens, they show you all the info you need, and go into overdrive with the use of the remix deck functions.  The finger sliders also act as pitch control sliders in case you happen to hear a train wreck in the making.

On the PLUS side of things:

XLR Outs
Native Instruments finally woke up and added integrated XLR outs, which, if you read my previous posts in the past, is a WORLD of a difference when playing live due to their sheer interlocking strength and reliability.  Great sound and cable reliability are a must!

Unlike its predecessor, the S8 is a full 4-channel stand alone mixer, so not only do you get a sound card interface for your laptop, you also get the piece of mind of having a serious analog backup plan B when the computer crashes.  BINGO !

I don’t really know of anyone other than a band of turntablists that still use 4 turntables simultaneously, but the S8 allows for up to 4 Phono inputs for stand alone vinyl sets or to utilize 4 Traktor Scratch control discs.  You can also have a 2-phono/2-aux set up too, so if you want to invite Q-Bert and crew over for a jam session, then look no further.

So far, there are 6 different views to toggle through, ranging from editing your beat grid, tweaking your effects base, viewing the remix decks parameters, and most of all, browsing through your precious track selections without the aid of a laptop. 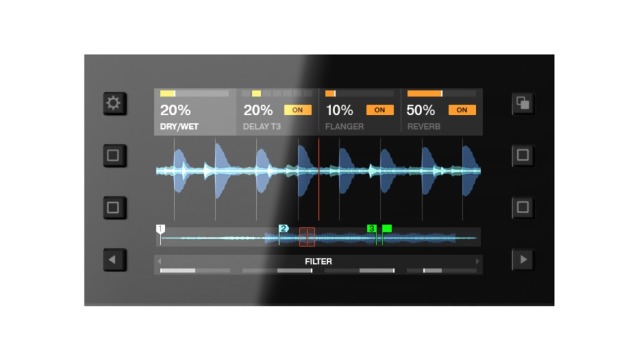 On the downside (minuses)

To put it simply, $1,200 plus sales tax is a lot of green for a controller, but I will give NI the benefit of doubt because they claim it to be more than just a controller.  You do get a solid piece of hardware, but Traktor should offer a discount for previous S4 owners.  We already have the software, and we have been loyal users of the greatest DJing platform.  [That last statement was not a plug or a holdout!]

I will stress it again:  those jog wheels do take up a lot of space, but did you really have to get rid of them altogether?!!  Maybe a smaller set might have been a bit more of a reach-out in design conservatism.  It is kind of tough to ditch the whole “wheels of steel” persona, and I do think it is a bit of a DJ trademark and longtime tradition.

They Got Rid of The Loop-Length LED Indicator

I already miss that little digital readout right next to the loop adjust knob.  I know there’s a new brightly colored screen, but I think it appears to be a bit too busy when all you need to do is set your loop length.  Sometimes simple stays better.  When Technics decided to add a pitch lock button to their 1200 turntables, it seemed a bit overdone to all the experienced DJs in the mix.  In the long run, it seemed like it was just fine without it.  The S4 was and still is an incredible design, so they should have kept some of its previous features intact.

The S8 Is Heavier and Bulkier

Part of the fascination with the Traktor design is its portability.  The S4 was never really that heavy when compared to its competitors, but the S8 may be a bit more of a challenge to travel with.  Also, you’ve got to keep in mind that you now have more electronics, and those dual color screens can be prone to cracking, smashing, and shorting out, which can be a real nightmare.  Yes, it is rugged, but you might not be that safe with that really slick nylon backpack when you’ve got $1200 riding on that overhead compartment.  Over the years, portability has been such a strong factor when choosing a controller.  Folks like Denon, Reloop, and Vestax have been perfecting this tradition.  The S8 looks like it will be a much safer bet if it remains stationary, but you can still pop it in a road case for travel, but you might have to ditch it as an allowable carry on piece of baggage.

Is That Touch Strip In A Safe Place, Or Is It Just Me?

I really like that touch strip, but I am curious to know if it is prone to wrist/arm sweat on those long nights.  I feel a little bit safer if it was above the performance pads, but it’s just my opinion… I would hate to set that thing off unintentionally.

You can read the full DJ Tech Tools article HERE

See the video for yourself and be the judge: