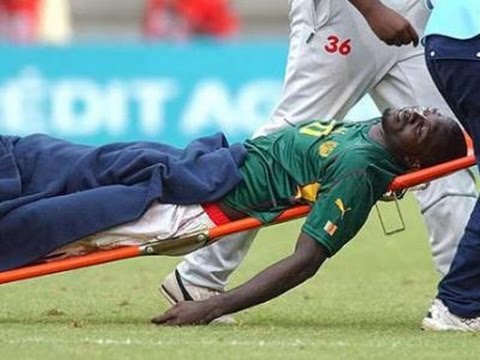 There is a gratified level of sportsmanship that makes soccer one of the most engaging games to be a fan of, but in all my years, I guess the inevitable had to occur sooner or later, after seeing years of clashes amongst fans after a heart-wrenched loss.  A soccer player gets killed by his own fan, an angry spectator, and you can thank Algeria for that.

Albert Ebosse, a 24 year old star among his own right, playing for, GET THIS, his home team, JS Kabylie, suffered a fatal blow to the head from a thrown projectile from a melee of disgruntled Algerian fans as the final whistle blew to a 2-1 loss.  Ebosse was rushed to the hospital, but his heart had failed at the table.

Algeria, a country that is no stranger to the financial strains of the global economy, with a growing 25% unemployment rate, housing shortages, and heavy government sanctions on industry, has certainly lost its marbles.  The eerie trend of utilizing the soccer match as an eventful stage for protest and riot has been escalating in the past few years, but now it has trumped into a massive crime scene for the rest of the world to witness.

I hope the individual gets a hefty death by stoning, and the Algerian government starts to focus on their plagued youth.  Even if a resolution is a stones throw away, nothing can bring back this gifted player.  A fucking shame, oh, and I am pretty sure I will never support Algeria as a country for soccer.