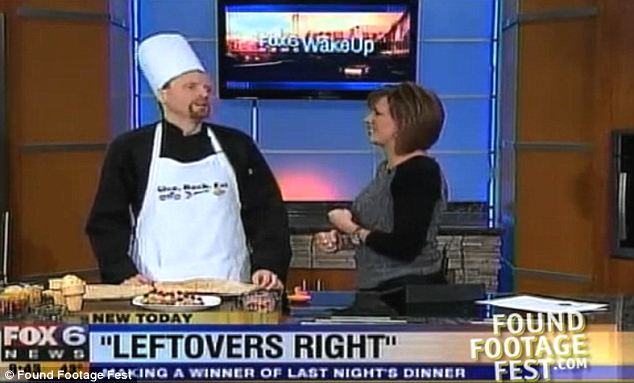 This interesting fellow brilliantly hoodwinked a handful of networks into thinking he was a real chef with his very own [fake] cookbook entitled “Leftovers Right: Making A Winner Of Last Night’s Dinner.”  With some devlish one-liners that soar right over the heads of these morning talk-show hosts, he bedazzles them into eating some nasty ass concoctions made from leftovers with the aid of some milk and a blender.  Just watch and laugh as they put on their savory fake-ass face for the television cameras as they buy into his bullshit.

The actor/prankster behind the fluffy chef’s hat is  Nick Prueher who is also affiliated with that clever little documentary titled Winnebago Man.  He is part of a crew that notoriously digs up some pretty seedy old VHS footage of some outrageously awkward public access TV moments that gets turned into some cult Americana humor on a website called foundfootagefest.com