These wonderful handheld arcade gems have really aged gracefully with their original gaming cabinet design.  Back in 1982, a really cool electronic toy company called Coleco launched 5 of these popular arcade classics: Pac Man, Ms. Pac Man, Galaxian, Frogger, and Donkey Kong.   Priced at about $60, they were destined to be the highlight of every birthday party or Bar Mitzvah shindig for miles and miles around.

Back before Nintendo DSs and PSPs, there was a very limited window in screen design on handheld video games, primarily because there were no pixilated graphics that could move you easily from screen to screen, so traditional animated graphics were out of the question.  We were all stuck with the simple but archaic LED circuitry to capture all the action, and for some odd reason, IT CAUGHT ON. 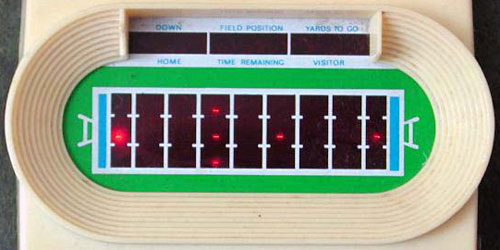 In the mid 70s, Mattel had cornered the handheld gaming market with their iconic sports games that basically featured a series of blipped LED lights that dimmed on or off to indicate game scenarios and action moves, but in the 80s, the technology was modified with LED colorized icons that turned on and off to create a rough animation to simulate arcade moves.  Believe it or not, it was the closest thing to the arcade in the palm of your hands, and all the kids lined up to buy ’em up.

With the original arcade cabinet design, it really made your sorry ass feel like you had your very own coin-op sitting in the corner of your bedroom.  Ok, so the rich kids on the other side of town had the real thing, but we were some real happy middle-class gaming sluts that wanted a piece of the action.  The best part for parents was not having to run out to buy a new game cart every month for $50, and if you collected them all, you had your little old mini arcade to boot and brag about.

We chose one game.  The game of our choice, and we savored it for countless hours.  No quarters, no waiting, just some regular C sized batteries.  It was the beginning of the handheld videogame phenomenon.  It started it all.  Times sure do change a lot… Damnit! – I miss my Coleco Galaxian…  “I GOT NEXT.”