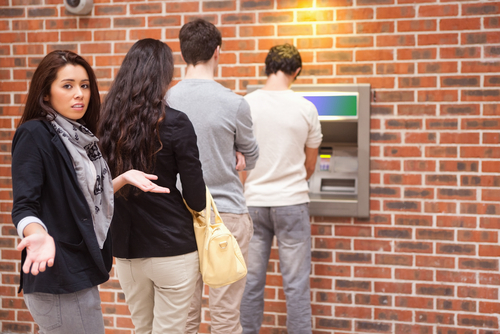 Finally, I’ve got some free time to myself.  Out and about, but a little low on cash.  I’m in my ride with the added luxury of not having to pay any ATM fees cause these sinister banks have their branches sprawled out every tenth of a mile.  It’s a downward spiral of a busy metropolis, luxury apartments in non-luxurious neighborhoods, driving out the simple pleasures of mom & pop businesses that have nurtured the needs of the many for decades past, ranging from a slice of pizza to any $5 lunch special- with a drink included. Ah, there it is, my bank.  I find a spot, read the fuck out of that NYC parking regulation sign, make sure the car alarm is armed, and make my way over to the festival of brightly lit corporate logo lights, plush carpeting, and that smell of office furniture in the air that belongs to no one.  I am in the ATM clinic, or at least it feels like one.

OK, ONLY two people ahead of me, two cash dispensing machines, should be no problem.  I mean that’s the whole fucking purpose, right?  To get cash in a hurry.  Seriously, I’ve got better things to do with my time than to wait in this awful pseudo office environment.  You get the picture.  They’ve got one of those new high-tech models that promise to dole out cash in under ten seconds.  Cool, I’ll just wait…  wait… There are two women, one on each machine.  Hey, whaddya know, I notice the bank is even STILL open!  There are actually human tellers still working.    Oh yeah, they’ve   e  x  t  e  n   d  e   d   their  teller hours so you can still get human help when you get out of work, when you actually need to BANK!

Dusk is closing in, yet I still haven’t moved from my spot.  Waiting.  Still waiting.   WHAT THE FUCK ARE THESE TWO WOMEN DOING?  I hear printouts and receipts spit out every six seconds.   WHAT THE FUCK?!!!  The woman on the left is sliding in a check after a check, and then the woman on the right is doing the same, and then I hear those button bleeps, coupled with brief pauses.  She is staring at the screen, “bleep”… “bleep, bleep” … pause… another long stare at the screen (I wanna look at the screen, but I can’t cause of the fuckin’ security shield.  I know I being nosy, but all this waiting has turned me into one nosy bastard, sorry!)  “bleep” …. “bleep”… pause… “bleep” The bearded war-torn looking hipster in front of me, whose depletion of all courteousness towards these two women, turns back at me and says the most fitting statement, “wow!”  I feel your pain my brother;  we are just two lost souls on a bread line just trying to get some of our bread from a damn machine.  Both caught in a moment of time, patiently waiting for these financial gurus to end this horrific banking cycle of sorts. The symphony of those bleeps continued onward.  If there were a dozen more of these hoarder ATM bankers, it would sound like a fuckin’ casino in here!

The middle aged woman on the right started to bow down and nestle herself in under her head because she finally felt the weight of our stare.  She might as well have been doing her hair and nails.  If you look at the situation from her banking perspective, that small footage of space was her God given right.  She did have a membership card, got through the door with a swipe, and the ATM made her feel at home with those fake social pleasantries and generic photos of smiley models that portrayed themselves as happy bankers that appeared as though to be happily banking in this institution.  “Bleep”… Was that another bleep I hear?  “Bleep”…  “bleep,bleep,bleep, bleep” Ah, another printout. Another stare at the screen, real climactic.

At this point in time, I did the daring.  “Are you kidding me?” I cried.   “Why don’t you just use the bank?” while motioning my arm toward the human tellers in angst.  They just both turned their necks and stared at me, and then turned their heads back to the ATM screen in their cocooned state.  “Maybe I can get on with my life… shit!” I sounded like an angry prisoner at this point, and the bearded hipster smiled on as we pointlessly still stood waiting up until the brief glimmer of hope had finally flourished.  The woman on the left appeared as though she had finished her lengthy business with that damned machine, and in secession, the woman on the right had finished too, sore fingers and all.  She turned sideways, grabbed her fake Gucci purse (I am estimating in the fakeness of that bag here, still pissed off of course) and bee lined to the door while ignoring the “Thank you for banking with us” pleasantry on the screen.  She disappeared into the night.   This ATM hoarder was a real pro at it.  I don’t think she’s seen or spoke to an actual bank teller in years.

After being held hostage in line, the bearded hipster and myself made our way to the controls like two captains of a ship in the middle of an ice storm.  We were both done and grabbed our cash in just under ten seconds.  Hey, that ATM technology is awesome as advertised, NICE!  I looked down at those crisp twenties and looked up at the sky and cried “WHY?!!!”, “WHY OH WHY DO WE HAVE TO PUT UP WITH ATM HOARDERS???!!!!”

This shit actually happened to me.  People please, the next time you see an ATM hoarder, say something and complain.  They need to know that people just like us need jobs as bank tellers.  They are put there by the banks to help you deposit those checks and spot the mistakes so your funds don’t get lost.  They are not models on a screen.  They don’t suck in paper, and they offer you free candy.  They also offer you the least possibility of having your photo taken for the IRS to gawk at, so  please use the fucking bank properly and leave those ATMs alone for people who just need a little cash to enjoy the freedom of having some free fucking time on the planet.