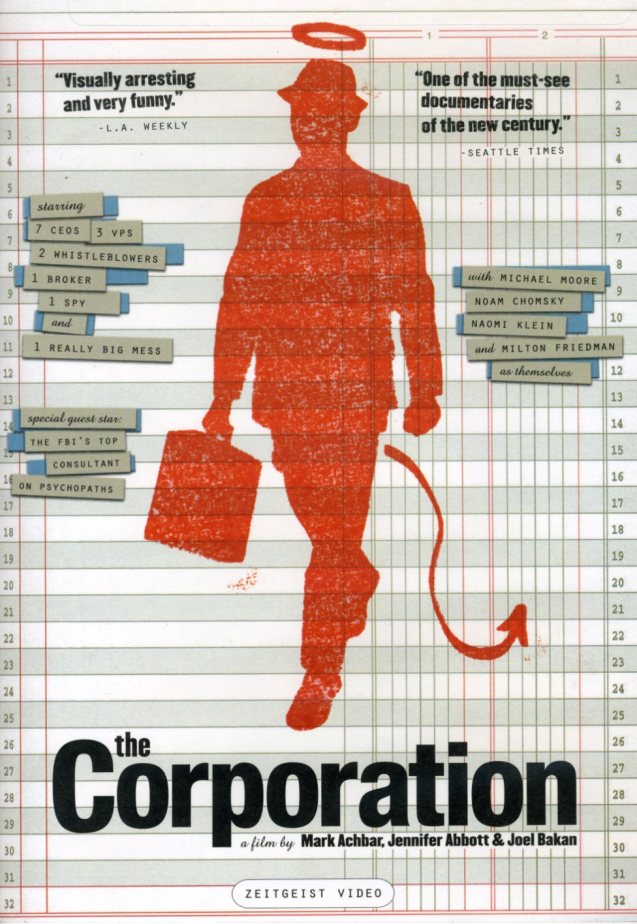 I know Black Friday and Cyber Monday have eloquently passed us, and the usual news clips of fights, stabbings, and threats among consumers are once again glorified as the counter-culture of some ingenious marketing/merchandising well orchestrated by the usual suspects of corporate ogres in our ever shrinking world of retail.  But before you open your credit card statement or wallet, you should re-settle in front of your trusty couch and recalibrate your senses to one of the most bona fide documentaries of our time: The Corporation (DVD ~$30-$35).

If you haven’t seen it, you should!

The governments and corporations of the world have seamlessly worked in tandem by slowly carving out our natural resources and endangering our health, but that’s just the beginning…  Aside from depleting the quality of our lives, they have cleverly managed to program us by controlling what we see, hear, touch, eat, and breathe.  Sounds like some kind of sci-fi movie, right?  But, it is happening consistently and this SHIT is for real.  The film covers all dynamics of how one little business concept has turned into a giant monster of a beast that controls the world, right from the gas pump to the water tap.

You won’t change the world watching it, but at least you’ll be aware of who’s really got your back.  Hint: It ain’t Mother Nature either…