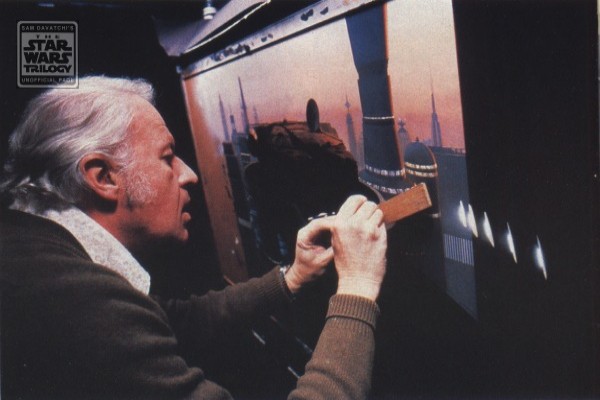 Ralph McQuarrie was the man who literally transformed many sci-fi movies way before CGI took over, and he managed to pull off this brilliant feat with just a paint brush.  Known for his conceptual paintings for the Star Wars dynasty, he conceptualized many characters and iconic scenes in his paintings;  just like the Cloud City docking platform in The Empire Strikes Back when Lando tells Han Solo: “You gotta lot of guts comin’ here, after what you pulled.”  The entire background in that shot was the painting you see here.  This amazing magic was known as matte painting.  It is the process of filming a live scene within a cropped painting that outlines the set the actors are in.  In this case, the set is merely the ramp or platform leading to the ship, the Millenium Falcon.  (OK, I’m a nerd…) This process saves thousands and thousands of dollars in production costs and still preserves the essence of the film and seamlessly ties in to the special effects.

Ralph McQuarrie’s innovations will be missed, and luckily,  they still remain preserved digitally- even in those remixed “Special Edition” versions.  He leaves us at the ripe young age of 82.  Rest in Peace.