With all the twists and turns in the Star Wars galaxy, nothing will ever compare to the best one ever made: The Empire Strikes Back.  If you still haven’t seen it, you should just buy the Blu-Ray this September that will have all six films.

Empire was directed by the late Irvin Kershner and was handed the job by George Lucas, one of his film students.  The film pretty much set the tone for sci-fi epics, and was also the apex for Industrial Light & Magic, the special effects company that made fantasy a reality years ahead of the whole CGI phenomenon. 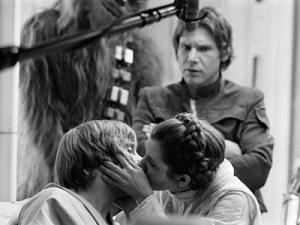 A large coffee table companion book titled The Making of The Empire Strikes Back chronicles all the events that led to the completion of this timeless space epic. You can get more info on the book here